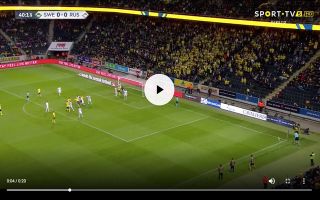 Manchester United defender Victor Lindelof made a rare impact on the other end of the pitch this evening, scoring a wonderful goal for Sweden vs Russia.

In the 41st minute of the tie, Lindelof showed a striker’s instinct to blast Sweden into the lead from 12 yards out with an excellent first-time finish.

Check out a video of Lindelof’s excellent finish below:

The 24-year-old Swede has looked very impressive for the Red Devils this season and it seems his experience with Sweden during the World Cup has turned his United career around.

Lindelof has featured in 11 of United’s 12 Premier League games this season and despite Jose Mourinho’s woes with the side this season, the Swede has come on leaps and bounds and is now considered a staple at the heart of United’s defence.