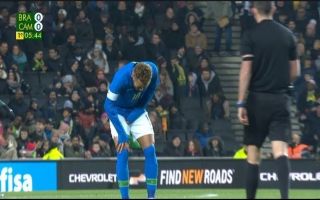 The Brazil captain attempted to play a cross into the box and in doing so appeared to pull his groin muscle.

The superstar was replaced by Everton ace Richarlison.

Check out a video of the injury below:

Injury fears for Neymar after the Brazil star forced off after just six minutes against Cameroon pic.twitter.com/AQsreUSvRJ

Neymar’s injury could prove to be a massive boost for Liverpool, Jurgen Klopp’s side are heading to Paris to face the French giants in their penultimate Champions League group stage tie.

Liverpool are currently second placed in their group, level on points with leaders Napoli and just one point behind PSG.

With group C being labelled the ‘group of death’, the Reds will need all the help they can get if they are to progress through to the knockout stages of the Champions League.

The more surprising thing to come out of tonight’s action is that Neymar was playing for Brazil in Milton Keynes, one of the world’s greatest players in action… in Milton Keynes.