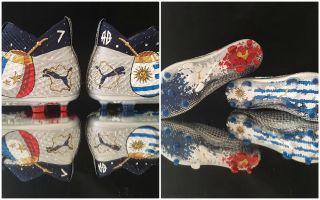 Antoine Griezmann has a deep-rooted respect for Uruguay, so much so that the France ace has had a specially-made pair of boots done for the upcoming friendly clash.

From draping a Uruguay flag around himself during a press conference in the World Cup this past summer after France defeated them in Russia to the influence of key figures in his career as detailed in the tweet below, it’s fair to say that the Uruguayans have made an impression on the Atletico Madrid superstar.

“I didn’t celebrate because when I started as a professional I was supported by a Uruguayan who taught me the good and the bad in football and I have a lot of respect for Uruguay,” he said this past summer after scoring. “I was also playing against friends, so I thought it was normal not to celebrate.”

Now, ahead of the international friendly between France and Uruguay on Tuesday night, Puma have made Griezmann a pair of boots which have both flags on them, as seen below.

Some will of course question whether or not he’s going too far, but this is ultimately about respect for the 27-year-old and tipping his hat to a country which has been influential for him in terms of those who have guided him to the position he’s in now.

Further, with the likes of Jose Gimenez and Diego Godin as teammates, that level of respect is likely to have continued.

With that in mind, we say fair play to Griezmann, and it’s highly unlikely therefore that if he does find the back of the net again this week that he’ll celebrate his effort. France boss Didier Deschamps though will be hoping sentiment doesn’t get in the way of his side securing a win.