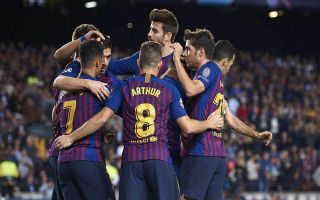 One of Barcelona’s out-of-favour stars is reportedly desperate to leave the club in the January transfer window, according to his father.

According to a report from Mirror Football, Barcelona’s Rafinha will desperately seek to leave the Blaugrana in January.

Rafinha has found first team opportunities hard to come by this season under manager Ernesto Valverde. The 25-year-old has only started 4 games for Barcelona across all competitions this season.

The Brazilian ace’s father Mazinho made the revelation on Radio Galicia Sport.

Mazinho had a very successful career making over 30 caps for Brazil, along the way Mazinho won the World Cup in 1994, as well as winning a Silver medal in the 1988 Olympics and winning the Copa America in 1989.

Check out what Mazinho had to say below:

? “It’s a crazy thing, nothing is understood. Only the coach knows what he has or not. The truth is that we try to make Rafa play regularly. We have to look for a way out and that it is very complicated.”

? Mazinho has confessed that the situation of Rafinha is surprising, despite being aware that in a club like Barça this can happen.

It might be in Rafinha’s best interest to listen to his father and pursue a move away from Barcelona, maybe then he’ll be able to finally live up to his potential the way his older brother – Thiago did, when he left Barcelona for Bayern Munich.

? “Here when you have three games in a row, then it is cut. The coach has his way of working, but for the player he’s doing well.”

? “He had a good preseason, spectacular games, and this is not understood. But that is football, it’s normal. And we have to be happy because we are in a great club, but he needs an exit to play more.”

On the potential of seeking a transfer away from the Nou Camp, Mazinho had this to say:

? The Brazilian has insisted that they do not refuse to seek an exit for Rafinha in the next winter market.

? “We do not rule-out an exit in the winter. If there are clubs interested, Barcelona is interested in the transfer and the player is happy, we will work together.”

Rafinha would certainly attract the attention of some of Europe’s top club if he decides to follow his father’s advice and leave Barcelona.

At 25 years old, Rafinha is now approaching the stage of his career where he should be playing regular first-team football, in his earlier years his lack of first-team minutes could be dispelled by the fact that he was earning valuable day-to-day experience with one of the best team’s in the world.

Unfortunately if Rafinha wants to have as much success as his father and brother, Thiago, the time has come for the Brazilian to move away in order to play first-team football.

Barcelona agree to midfielder’s exit on initial free transfer in deal worth up to €3m October 5, 2020 21:17
FC Barcelona