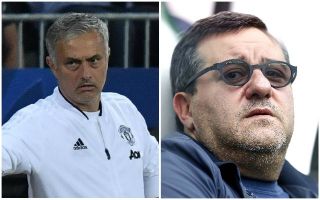 Paul Pogba reportedly wants to return to Juventus, and his agent Mino Raiola could be plotting a way of securing his exit from Man Utd.

The French superstar established himself as one of the top midfielders in Europe during his previous stint in Turin, showcasing his quality and winning a number of trophies.

However, he opted to return to United in 2016, and he has since struggled to discover his best form on a consistent basis which has led to question marks over his future at Old Trafford, particularly after he suggested earlier this season that he wasn’t entirely happy, as noted by The Guardian.

Now, Tuttosport claim that the 25-year-old wants to return to Juventus and it’s down to his agent Raiola to find a way to make it a reality.

A January deal seems highly unlikely given that Man Utd would surely struggle to get the best value deal and won’t want to lose a fundamental figure in the middle of the season with no quality replacement immediately lined up.

In turn, it’s suggested that a summer move is more likely but there are three issues standing in the way from firstly convincing United to sell, to the transfer fee involved as well as Pogba’s wages. It’s suggested that it will likely take a fee in excess of €80m to prise him away from Man Utd next summer.

Time will tell if those obstacles can be overcome via Raiola’s negotiation tactics, but as speculation refuses to go away, Pogba going back to Juventus remains a threat for United.

With the likes of Blaise Matuidi and Sami Khedira not getting any younger, coupled with the ‘win now’ mode that Juve seemingly adopted this past summer by signing Cristiano Ronaldo and Leonardo Bonucci, adding Pogba to the mix either in January or next summer will undoubtedly make their line-up all the more formidable as they look to extend their current domestic dominance and try to conquer Europe too.