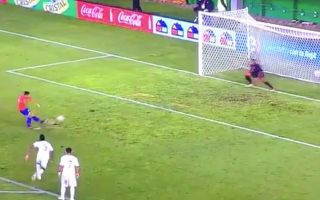 Man Utd and Chile forward Alexis Sanchez didn’t have much joy from the penalty spot over the international break as he missed another against Honduras.

The 29-year-old was off the mark against Costa Rica in 3-2 defeat for his side on Saturday, albeit he did score a late consolation goal.

Fortunately for him, his penalty miss didn’t prove costly on this occasion as Chile secured a 4-1 win over Honduras, and he contributed to that by being alert to the rebound and tapping home on the hour mark to give his side a 3-1 lead.

Despite sparing his own blushes this time round though, the United star will undoubtedly hope to be more accurate from the penalty spot moving forward to make life easier for himself and his teammates.

It remains to be seen if he’s given the same duty when he returns to Old Trafford, but on the basis of his last two spot-kicks, Jose Mourinho would arguably be sensible in ensuring that someone else steps up…

Another penalty miss for Alexis Sánchez, but scores in the rebound pic.twitter.com/B4T9hFeSdb