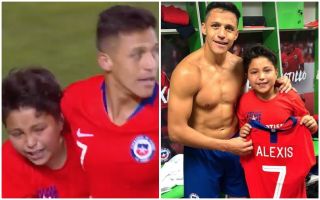 After storming the pitch to celebrate with Alexis Sanchez and the Chile players on Tuesday, a young fan was treated to the Man Utd star’s shirt and boots after the game.

The 29-year-old got himself on the scoresheet on the hour mark as he converted the rebound having initially seen his penalty saved in a 4-1 win over Honduras.

As he went to celebrate with his Chile teammates gathering around him, replays showed a young fan had made his way onto the pitch, only to slip on the grass and go crashing to the floor and into some of the players, as seen around the 10-minute mark in the video below.

On seeing this, Sanchez was the first to comfort him and get him back on his feet, before walking him to the side of the pitch as the youngster was seen in tears.

His night was about to get even better though as Sanchez posted the Instagram video and image below of the young fan in the dressing room with him after the game, as he was treated to the United ace’s shirt and boots.

From the lows of his unfortunate fall to the highs of meeting his idol and going home with some souvenirs, it’s classy stuff from Sanchez…

?la Inocencia de los Niños es una de las cosas más Lindas , ????? ? the innocence of children is one of the things most beautiful ? ????