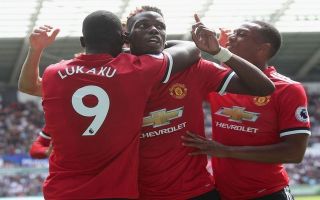 The 22-year-old has scored seven goals in 14 appearances so far this season, but six of those have come in his last five Premier League outings.

In turn, the last thing that Mourinho wants now is to see him sidelined by injury, which was a concern after he was forced to withdraw from the France squad last week, as noted by BBC Sport.

However, as per Sky Sports’ tweet below, the French international has been back training this week for two consecutive days and so that would suggest that he will be available for selection this weekend when United face Palace at Old Trafford on Saturday afternoon.

As they continue to languish in eighth place, it’s imperative from a United perspective that they secure all three points this weekend to start on a positive note after the international break.

Seven points adrift of the top four and 12 points behind leaders Man City, Mourinho and his men risk being cut off from their rivals in the coming weeks and months if they can’t put results together consistently, and so Martial will be crucial in making that happen given his recent run.

Time will tell though if the injury concern has left him short of match sharpness which could emerge as a fresh issue when United take to the pitch on Saturday if he is indeed passed fit.

Anthony Martial is back in training for @ManUtd after withdrawing from the France squad through injury.