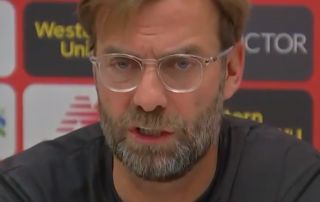 Liverpool manager Jurgen Klopp took a subtle dig at former Reds stars who deserted the club at the peak of their powers.

Big names like Luis Suarez and Raheem Sterling left Anfield a few years ago, while Klopp himself was forced to sell Philippe Coutinho to Barcelona back in January.

"This is a statement"

Jurgen Klopp believes the signing of Sadio Mane's new contract shows how the club is moving to the next step.

But speaking after the renewal of star forward Mane, Klopp praised the fact that players may now feel that they have a chance of winning big by staying with Liverpool instead of feeling the need to move on.

While the German tactician did not name any names, one imagines he was referring to the blow of losing big names like Suarez and Coutinho, while Fernando Torres, Xabi Alonso and Javier Mascherano are also others who left in big moves in the last decade.

‘It shows a bit of the change the club did in the last few years,’ Klopp said in the Sky Sports video above.

‘I think a few years ago it mostly happened that players in a very good moment thought they had to leave the club to make the next step.

‘Now obviously our boys think they can make the next step here.’