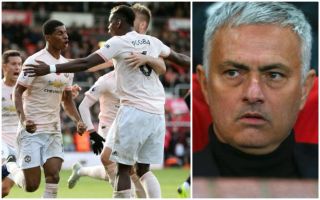 Manchester United starlet Marcus Rashford is reportedly considering a transfer away from the club amid interest from Spanish giants Real Madrid.

The England international has long looked one of the most exciting young talents in the country, but has failed to really kick on since his explosive breakthrough in the first-team back in the 2015/16 season.

MORE: How Memphis Depay has utterly humiliated Manchester United since his transfer to Lyon

Rashford perhaps doesn’t seem the ideal Jose Mourinho-style player, having been shifted out wide from his preferred striker role and given more defensive work to do on the flanks.

According to the Sun, the 21-year-old is now considering his future as he is not happy at his lack of progression under Mourinho.

It certainly seems like Rashford could benefit from a change of scene and more opportunities in a set-up to suit his style of play.

There’s a talented player in there somewhere, but it’s not happening for him at Old Trafford at the moment and a big opportunity like Real Madrid would understandably be hard to turn down.