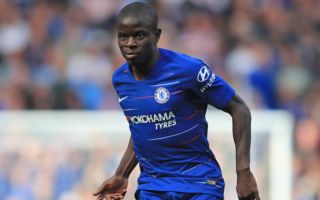 Chelsea midfielder N’Golo Kante still needs to improve his finishing and contribute more in the final third of the pitch, according to his manager Maurizio Sarri.

The France international was confirmed as signing a new long-term deal with the Blues this morning, in what everyone at the club will surely agree is great news.

Kante has been one of the very finest defensive midfield players in the world for the last few years, though Sarri has somewhat surprisingly used him in a more attacking role this season.

While this doesn’t seem ideally suited to the former Leicester City man’s strengths, Sarri seems determined to make it work and called on the 27-year-old to improve his output in the final third after discussing the player’s new contract in his press conference today.

It remains to be seen if Kante can make it work in a more attacking role, though it’s worth noting that Sarri has generally improved most players he’s worked with in recent years, having done fine work at previous club Napoli.

The Italian knows what he’s doing and has clearly seen something in Kante to persuade him to give him more attacking freedom, preferring summer signing Jorginho to operate deeper.

Sarri on Kante as a player in his system: "He is important in the defensive phase. He is improving in the offensive movements. He needs to improve in the final 20-25 metres. He can score more." #CFC

Sarri told reporters, as quoted by Nizaar Kinsella: ‘He (Kante) is important in the defensive phase. He is improving in the offensive moments.