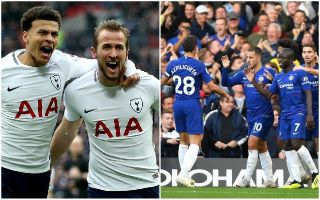 Tottenham and Chelsea face off in this weekend’s biggest Premier League clash, here is our best effort at a combined XI between the two sides.

The tie will take place at Wembley and despite Chelsea being ahead of their rivals in the Premier League table, Spurs ran out 3-1 winners when the sides met towards the end of last season.

With Chelsea looking extremely impressive under new manager Maurizio Sarri, the Blues dominate the lineup with 7 players to Tottenham’s 4.

Check out our combined XI below courtesy of createformation.com: 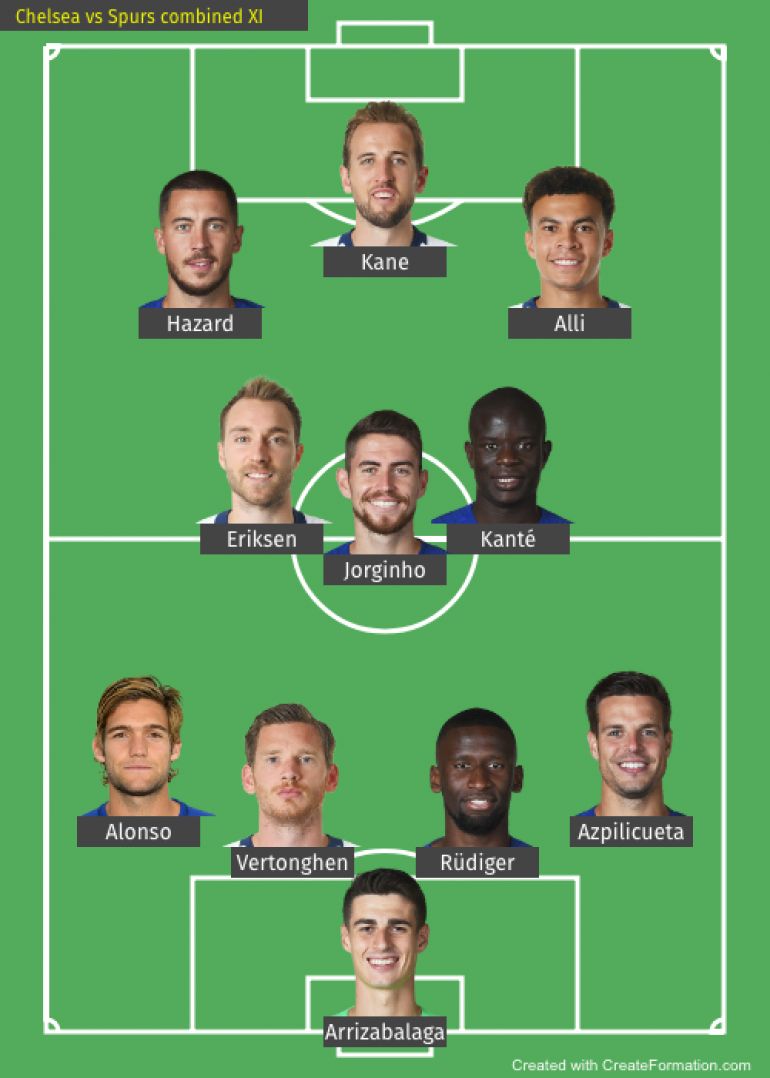 Read on for the reasons behind each selection:

Hugo Lloris is still regarded as one of the world’s best shot-stoppers but his decision making has been atrocious so far this season, whereas the 24-year-old Kepa has managed to keep a cool head despite a whopping £71m price tag looming over his head.

Germany international Rudiger has been one of the Premier League’s standout defenders so far this season and the 25-year-old is well and truly the rock at the heart of Chelsea’s defence. It is a testament to how well Rudiger is playing that he has managed to keep out Tottenham’s Toby Alderweireld.

Vertonghen is one half of what has proved to be one of Europe’s most impressive centre-back pairings in recent years alongside his compatriot Alderweireld. Vertonghen is returning from injury and Spurs will need the 31-year-old to be at his best to stop Eden Hazard.

Vertonghen’s composure on the ball and reading of the game is unparalleled.

Azpilicueta very rarely puts a foot wrong on the defensive end and this is enough to keep out Kieran Trippier who is much more effective when utilised in a wing-back role.

Who else but Marcos Alonso? The Spaniard has developed his game since Maurizio Sarri took over at Stamford Bridge, the left-back is still as lethal going forward as he was when used as a wing-back and the 27-year-old has looked much more comfortable defensively so far this season. 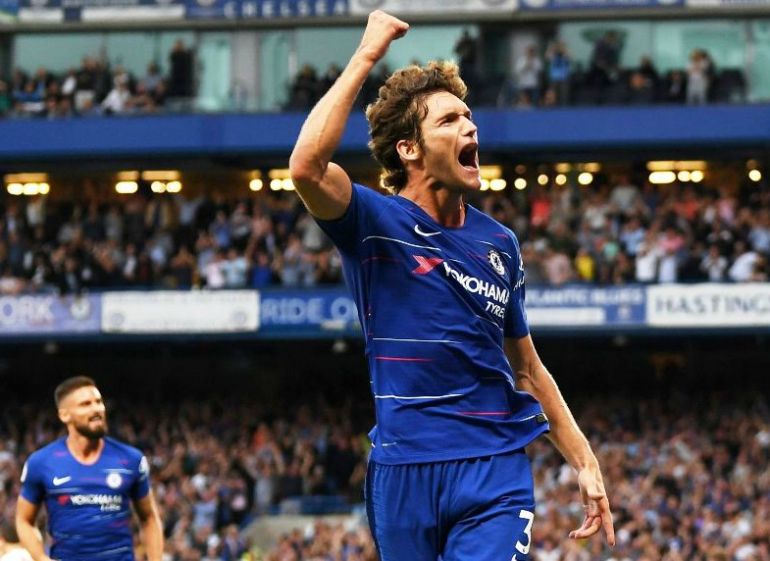 Alonso has already laid on three assists to his teammates this season. The left-backs lung-busting runs forward could pose a significant threat to Tottenham.

The Frenchman is relentless with his work-rate in midfield, not a game goes by where the World Cup winner hasn’t covered every blade of grass on the pitch.

There have been question marks over Kante’s suitability to Sarri’s system at Chelsea, the Frenchman is now deployed as a right-central-midfielder, playing second fiddle to summer signing Jorginho – who is a deep-lying playmaker for the Blues.

Kante is still one of the best in the world at what he does and the former Leicester man sweeps up almost everything in midfield.

Jorginho is Sarri’s on-field general for the Blues, the Italian marshals the side extremely well. Jorginho has made the most passes of any player in the entire league and the star’s ability to dictate the tempo of a game from the middle of the park is one of the reasons why Chelsea have transitioned to life under Sarri so well. 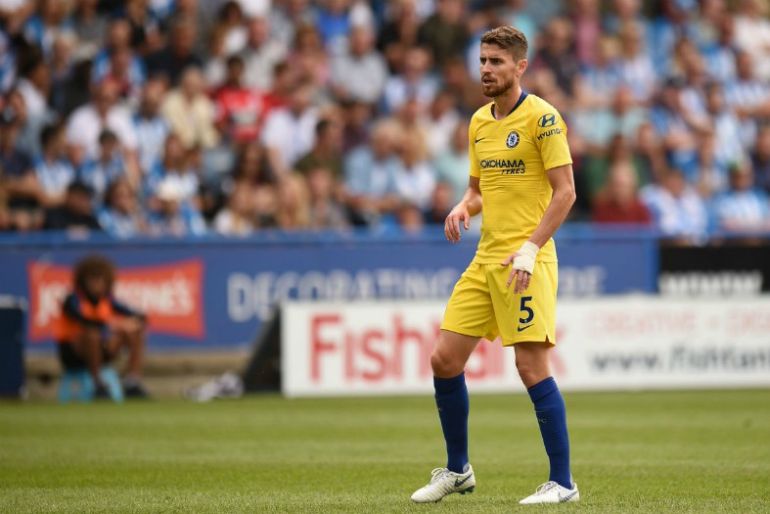 Jorginho will be the key in Chelsea’s bid to take control of the game from the get-go.

Eriksen is by far the most technically-gifted player between the two sides and the Dane is masterful with the ball at his feet. Eriksen has the quality to split any defence in the world with one of his inch-perfect passes and Chelsea will have to be at their best to stop the attacking-midfielder from fashioning chances for his teammates.

Dele is the surprise selection in our combined XI, largely down to the fact that the England international has put a sword to Chelsea’s defence in previous meetings.

Dele has struggled this season largely down to injuries but the 22-year-old is one of the best players in his age group across world football.

Chelsea can’t afford to make any lapses in concentration or they will be punished by the attacker’s wonderful runs over the top or his endless trickery on the ball.

Hazard has flourished for Chelsea since Sarri has taken the reigns at Stamford Bridge, the Belgian started off the campaign in wonderful form.

Hazard’s form has since dropped off with the Belgian suffering from injury but Chelsea’s number 10 will need to deliver a top class performance against Spurs if he wants his name to be mentioned alongside the likes of Cristiano Ronaldo and Lionel Messi. 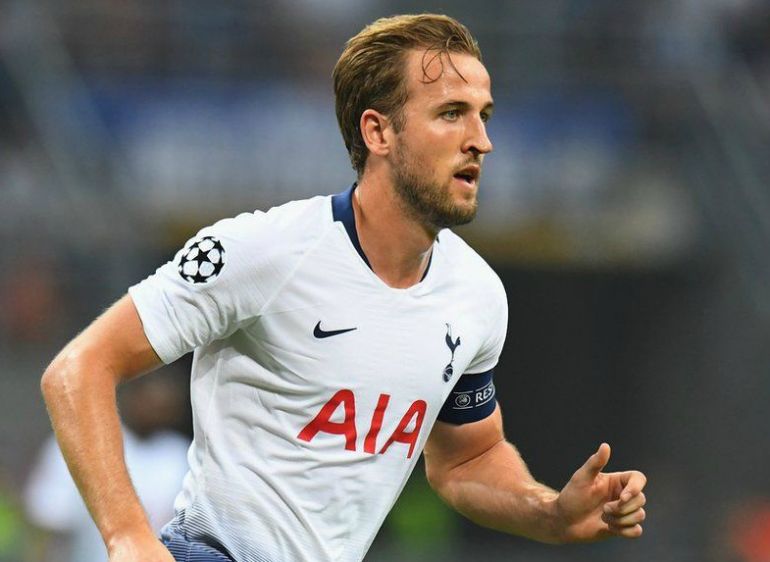 Kane will be looking to prove to fans that he’s still the best striker in the league with a clinical performance against Chelsea.

This choice was a no-brainer, Kane may not be in his best form ever but the England captain has still managed to score 6 goals so far this season.

The Chelsea defence can’t afford to give Kane a moment to breathe or they will have to face the wrath of the star’s clinical finishing on Saturday evening.