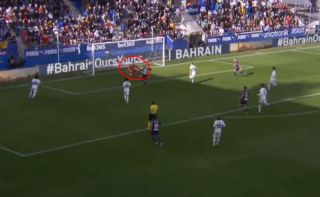 Thibaut Courtois really hasn’t made the best start to life at Real Madrid, and he looked far from convincing again on the opening goal by Eibar this afternoon.

The former Chelsea goalkeeper has really not looked like the upgrade on Keylor Navas that the Spanish giants thought they’d be getting, and these fans are hugely unimpressed.

MORE: Chelsea transfer target will be far from happy with decision Real Madrid manager has made for fifth consecutive game

There’s plenty of angry response on Twitter right now as the video below shows Courtois fumbling a shot that ended up in the back of the net, though some might argue his critics are being a tad harsh given that he got anything on it at all at point-blank range.

See what you think, but here’s how the latest goal conceded by Real Madrid is going down – and remember you can keep up with the rest of the game on Eleven Sports!

Madrid made a mistake by signing courtois ???

Thibaut Courtois has conceded more goals in the last month than Kepa Arrizabalaga has all season.

Madrid made a mistake by signing courtois ???

Courtois was such a fraudulent signing ?

Courtois is scaring me #RMLiga
Start navas instead of this snake