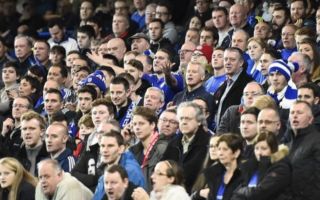 Football fans flocked to Twitter this evening to slam Chelsea winger Eden Hazard for one particular moment in the Blues’ match against Spurs at Wembley.

Maurizio Sarri’s side are unbeaten in all competitions so far this season, however it looks like this run is about to come to end given the fact that his Blues side are 2-0 down to Spurs at half time.

Goals from Dele Alli and Harry Kane are proving to be the difference between the two sides so far, and if truth be told, the north London side should probably be ahead by a bigger margin given the chances they’ve had.

The west London side have failed to muster up any meaningful chances thus far, with stars like Hazard and Alvaro Morata’s best effort not enough for Chelsea to find a way back into the match.

One moment in the match that caught the eyes of a lot of fans came late in the first half, when Hazard seemed to be fouled in the area by Moussa Sissoko.

This action from Hazard was labelled as a ‘dive’ by a number of angry fans, who took to Twitter to hammer the Belgian for his theatrics this evening.

Here are a few select tweets from fans voicing their opinions on Hazard’s ‘dive’ against Spurs. Did the Belgian go down too easily, or was it genuinely a penalty? Let us know below.

Why hasn't Hazard received a yellow for that dive? Disgusting and desperate. #totche #bbcfootball

Shocking dive from Hazard. And yet no yellow card? #COYS

I love Eden Hazard alot but that's a dive, first time I've seen him do that. #CFC

If hazard is one of the best in the world why dive???

Look at the replay – embarrassing dive by Hazard. Should have been a yellow

Does anyone dive more that Hazard ?#TOTCHE