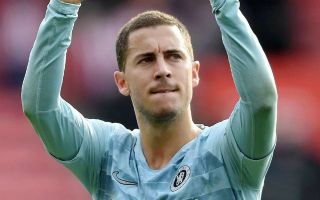 Chelsea star Eden Hazard is reportedly ‘fed up’ at the club and desperate for a transfer to Real Madrid.

While speculation surrounding the Belgian’s future has been going on for some time now, these updates will get more and more worrying for Blues supporters as their star player gets closer to the end of his contract.

MORE: Richest footballers in the world

Hazard’s current Chelsea deal expires at the end of next season and it doesn’t appear that much progress has been made on tying him down to a new one.

One report earlier today from Don Balon claimed Chelsea were ‘not in the business’ of renewing Hazard’s contract, and now there looks to be more bad news from sources in Spain.

According to Diario Gol, the 27-year-old is ‘fed up’ at the club, and it’s suggested that may be in part due to the new contract and big pay rise given to his team-mate N’Golo Kante, making him the west Londoners’ highest earner.

None of this sounds at all promising for Chelsea, who lost Thibaut Courtois to Real Madrid in the summer in a slightly similar situation as he ran his contract down to its final year.

Speaking in his press conference yesterday, Chelsea boss Maurizio Sarri couldn’t give much of an update on the Hazard contract situation, but sounded optimistic that CFC could keep hold of him.

‘I don’t know the evolution of his deal,’ the Italian was quoted by Nizaar Kinsella. ‘But I think that we can do it.’

Sarri on Hazard following Kante's renewal: "I don't know the evolution of his deal but I think that we can do it." #CFC