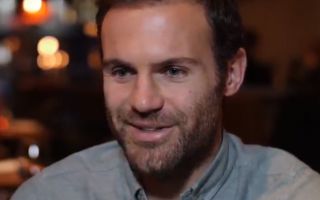 Manchester United star Juan Mata has dropped a big clue he wants to stay at the club as he marks his 200th appearance for the Red Devils today.

The Spanish playmaker has been linked with Arsenal by ESPN and others recently as he heads towards the end of his contract at Old Trafford.

Mata would no doubt be a big loss on a free transfer, and a great signing for whoever snaps him up after some fine form for United recently.

Still, it seems from this video interview above that Mata is loving life with the club and stressed several times in the clip that he hopes to add many more games to his 200 appearances.

You heard him, United, get him that contract!

“I don’t like it, I hope it doesn’t happen” – Liverpool star James Milner fights to save football in superb post-match interview
More Stories Juan Mata