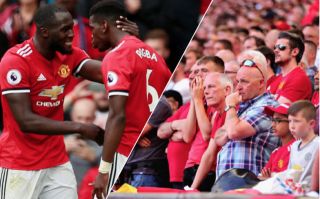 Manchester United played out a drab 0-0 draw with Crystal Palace at Old Trafford, and some United supporters weren’t best pleased with a certain Red Devils star’s performance in the match.

Jose Mourinho’s side have struggled in the Premier League so far this season, and this continued on Saturday as they failed to come away from their match vs Palace with all three points.

Following Saturday’s results, United now sit 14 points behind local rivals and league leaders Man City, a total that effectively puts the club out of the title race once and for all.

One player’s performance against Palace caught the eyes of a lot of United fans for all the wrong reasons.

Belgian forward Romelu Lukaku had a shocker against Roy Hodgson’s side this afternoon, something that saw a whole host of fans turn on the striker on social media.

A plethora of fans took to Twitter to call for United to sell Lukaku, with some even branding the former Everton and Chelsea man as ‘useless’ following his display against the Eagles.

So, we’ve picked out a number of tweets from fans berating Lukaku after United failed to beat Palace at Old Trafford in Saturday.

If Lukaku messes up against Palace please sell him. Yes, o ye, of little faith #MUFC

Please sell Lukaku. A striker who can’t score is unacceptable this will be 11 games today if he doesn’t. Prove me wrong you absolute lump!

Fuck you @ManUtd Screw yah. Sell lukaku he should never play for my team

Getting real tired of lukaku. Just sell him please

Sell Lukaku. Good for nothing now

Lukaku ain’t and will never be it. Our next manager has to find a way to package and sell him to recoup at least half the money.