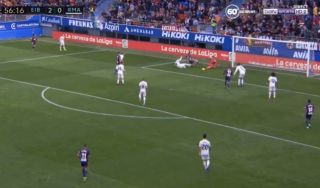 Real Madrid have conceded twice in the space of five minutes against Eibar as their La Liga game today turns into an absolute disaster.

You may want to catch the second half of this astonishing game with a Eibar Real Madrid live stream from Eleven Sports, who are also providing goal videos, as seen on their Twitter account below.

Eibar have doubled their lead! ?

Real Madrid have never been beaten by Eibar… pic.twitter.com/8dHX8vaDnR

It’s an absolute mess from Real on the second goal, as Toni Kroos plays a risky pass across the pitch that puts his defence in trouble to give Eibar an easy shot at goal.

It’s not much better on the third either as Thibaut Courtois once again looks suspect as he comes for the ball but is beaten to it, leaving the goal gaping…

Real Madrid trail 3-0 away against Eibar.

Before today, Eibar had only scored three goals against Madrid in #LaLiga history. ? pic.twitter.com/0Cf9Pb7pfQ

Can Real Madrid possibly come back from this now?