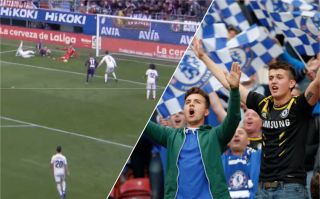 Thibaut Courtois didn’t exactly have the best of games for Real Madrid this afternoon, something that has prompted Chelsea fans to take to Twitter to laugh at the Belgian’s misfortunes.

Real suffered a heavy defeat to La Liga minnows Eibar on Saturday, as Santiago Solari’s men lost 3-0, their fifth league defeat of the season so far.

Courtois himself was poor during the match, with the Belgian being at fault for Eibar’s first goal, as well as being helpless to stop Real conceding a second and a third.

The former Chelsea man left Stamford Bridge on somewhat sour terms this summer just gone, and it seems like Blues supporters are getting the last laugh following Courtois’ shoddy start to life in the Spanish capital.

During and after the match, Chelsea fans were quick to jump on social media to berate Courtois for his horror show against Eibar this afternoon, something that played a big role in Solari tasting defeat for the first time as Los Blancos boss.

Here are a few select tweets from Chelsea fans laughing at Courtois for his below-par display this afternoon.

Does the Belgian deserve this? Some of you Chelsea fans will definitely think so….

I love seeing Courtois flop. It’s what he deserves

Heard of karma but finally witnessing it. Courtois deserves every ounce

Real Madrid are so much struggling. I pity them.

But hey, its that snake ? Thibaut Courtois in post. He deserves it.

Somehow I think that Courtois deserves all the goals he conceded at Real Madrid ? IN YOUR FACE MAN

Courtois deserves this for being a snake https://t.co/9qPK869IAg

Courtois talked too much nonsense when he left Chelsea, after all Chelsea did for him. He deserves all the misfortunes he us facing.

Madrid really lost to Eibar 3-0 lol,damn Thibaut Courtois is conceding like 3 goals or more every game,damn he’s really settled in well at the Bernabeu pic.twitter.com/PEJEiJyN35