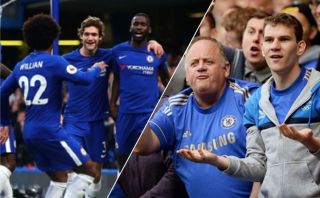 Chelsea fans took to Twitter to hammer defender Antonio Rudiger this evening for his display in the Blues’ 3-1 loss to Spurs at Wembley.

Goals from Harry Kane, Dele Alli and Heung-Min Son were enough for the north London side to end Chelsea’s unbeaten start to the Premier League season, as Mauricio Pochettino’s side leapfrogged the Blues in the table following the result.

Chelsea grabbed a consolation late in the match through Olivier Giroud, as Maurizio Sarri tasted defeat for the first time since joining the west London club in the summer.

A lot of Blues stars played awfully today, however the two players who seemed to put in truly shocking displays was that of David Luiz and Rudiger.

Rudiger was particularly poor for Sarri’s side this evening, as the German international struggled to contain the likes of Kane and Alli throughout the match.

A lot of fans noticed that, with some even taking to Twitter to hammer the former Roma man for his lacklustre performance against Spurs on Saturday.

Here are a few select tweets from fans who weren’t best pleased with Rudiger’s display tonight.

And to be honest, we can’t really blame them…

Rudiger's worst game for Chelsea.. Worse than the roma game

Worst i have seen Rüdiger play

Rudiger be the most useless player ever