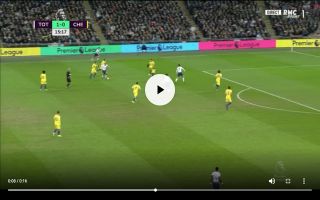 Harry Kane doubled Tottenham’s lead against Chelsea in the 16th minute of the mammoth Premier League tie this evening, there was some awful defending on show from Chelsea in the lead up to the goal.

Kane picked the ball up from midfield and was left free to drive towards the Chelsea goal despite being surrounded by Blues players. Kane finally let fly from 30 yards out to double Tottenham’s lead.

Check out Kane’s goal below:

Kane with a beautiful goal:

This angle shows that Chelsea goalkeeper Kepa was left rooted to the spot and the Spaniard failed to even try and prevent the ball from hitting the back of the net.

Kane makes it 2 for Tottenham 16 mins into the game, Kepa was sleeping there tho ??#TOTCHE pic.twitter.com/3ezKF1ADD8

Could Chelsea be fizzling out after an impressive start under Maurizio Sarri.