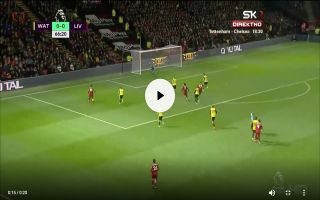 Liverpool broke the deadlock in the 66th minute thanks to a goal from Mohamed Salah, the star continued his great goalscoring run against Watford with a tidy finish.

The move was started by Roberto Firmino, the Brazilian split the Watford defence with a wonderful pass into the path of Sadio Mane.

The Senegalese star then picked out Salah in the middle of the box with a low cross and the Egyptian scored with a first-time strike.

Watford keeper Ben Foster will be kicking himself after the goal as the former England international could have easily stopped the ball from hitting the back of the net.