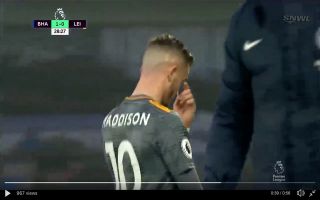 Leicester City and England playmaker James Maddison was sent off this afternoon after a shocking dive, the midfielder was shown two yellow cards in just three minutes.

Maddison was shown a second yellow card for simulation only three minutes after being shown a yellow for a bad foul. The attacking midfielder’s actions have left Leicester with little chance of coming away from Brighton with any points.

The video of the incident will certainly not be doing Maddison any favours it’s clear to see that the midfielder’s attempt to win a penalty was theatrical at best.

The England under-21s star went down after little to no contact from Brighton’s Shane Duffy.

James Maddison sent off for this dive ??#LCFC pic.twitter.com/tW5kynFfCG

The 22-year-old was called into England’s senior squad for the first time last month and his actions this afternoon could well hinder his chances of receiving a call from Gareth Southgate in the near future.

Check out some reaction to the incident:

Why is he diving smh

Absolute idiot, let himself and his teammates down there. Ridiculous

And it was a dive. Shame on you @Madders10. Let your team down there mate

It also seems as though this isn’t the first time Maddison has dived according to these fans:

Diving from @Madders10 !? Surely not…

Video: ‘He must be calm’ – Thomas Tuchel sounds a warning to Chelsea star ahead of Palace test
More Stories Gareth Southgate James Maddison