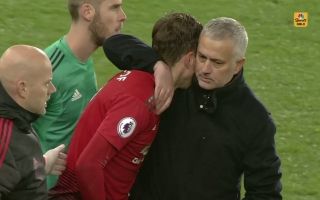 Manchester United centre-back Victor Lindelof was one of the only players to be praised by United fans after the side’s lacklustre showing against Crystal Palace.

In the final stages of United’s bore draw with Crystal Palace, Victor Lindelof won plaudits from fans when he managed to break down a threatening Palace attack whilst clutching his thigh.

United fans were impressed with the Swede’s commitment and it is a real shame that none of his teammates echoed the same passion as him this afternoon.

Lindelof clutching his thigh while still being able to intercept and beat 2 players. Fantastic commitment ? pic.twitter.com/21iQnOICJ7

Victor Lindelof limping and clutching his injured thigh but still showing strength and beating 2 players is the Man Utd spirit we love to see.

This is now officially United’s worst start to a league season in 28 years, this isn’t even the most telling conclusion that was made after the draw.

United now sit 14 points behind noisy neighbours Manchester City and 12 points behind rivals Liverpool, United’s season could go down as one of the worst in the club’s recent history and Jose Mourinho’s men will face a struggle just to play Europa League football next season.