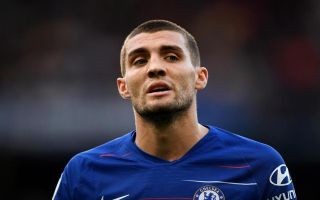 Mateo Kovacic was the subject of criticism from Chelsea fans after the Croatian midfielder attempted a ‘rabona’ cross while his side were 2-0 down against Tottenham.

Kovacic’s audacious ‘rabona’ attempt was easily picked off by the Tottenham defence and Kovacic’s poor decision making led to Tottenham launching a counter-attack, luckily for Chelsea and Kovacic the attack came to nothing.

Chelsea’s midfield have been run rampant by Tottenham and the Blues midfield watched on only 15 minutes earlier as Harry Kane drove forward from midfield and doubled Tottenham’s lead with a strike from 30 yards out. Check out the goal here.

Check out a photo of Kovacic attempting the cross below:

This certainly wasn’t the right decision for Kovacic to make. With Chelsea 2-0 down the smart thing would have been to retain possession of the ball at all costs but by attempting something like a ‘rabona’ just didn’t do anything to show that Kovacic was trying to get a grip back on the game from midfield.

Check out some reaction to Kovacic’s audacious attempt:

Not saying that Chelsea have had their Christmas party this afternoon, but given what's already happened in this game, Mateo Kova?i? has just tried a Rabona for absolutely no reason at all.

Kovacic is a nothing player.

Kovacic is one of those who at first glance looks amazing, so neat in possession, great engine, but doesn't actually contribute any goals and assists. #TOTCHE

What an absolute shambles that half has been biggest game away in the season and we perform like that unacceptable to say the least. Sell luiz now how can you say your a Chelsea player when you move out the way off the ball kovacic showboating shows how much he cares piss off

Btw that Kovacic rabona was disgusting. 2-0 down aswell. Almost unforgivable

Trying a Rabona when we're 2-0 down? Go home Kovacic you're drunk! Almost cost us on the counter…#TOTCHE #CFC

Mateo Kovacic is literally the most useless Center Mid ive ever seen.

Midfield overrun. Kovacic attempting fucking rabonas. Any danger of us getting our act together in this half. Spurs have been best in every department. #CFC

What does Kovacic do? What are his strengths? I've literally seen him do nothing every game.

Is Kovacic taking the piss? Doing a Rabona while loosing 2-0 in a London Derby.

2-0 down & Kovacic without a goal or assist all season attempting a robona cross straight to a Tottenham player… just don’t get how important this game is, use your fucking left foot & find a Chelsea player ffs

What exactly does kovacic offer? Honestly