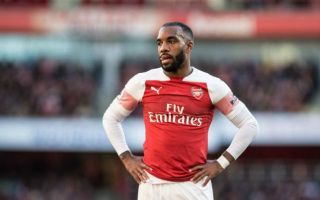 Arsenal have confirmed an injury to Alexandre Lacazette today means he misses the Premier League away game at Bournemouth.

The Frenchman’s absence raised one or two eyebrows on social media when the team news for today’s match came out, but it seems there is a perfectly innocent explanation.

With Mesut Ozil being surprisingly dropped to the bench for the trip to Bournemouth, some fans could be forgiven for thinking manager Unai Emery was really keen to shake things up today.

The Spanish tactician is also trying out a new formation, starting with three at the back, but it seems Lacazette’s absence is not anything to do with tactics.

Arsenal’s official Twitter account reports that the 27-year-old has a slight groin problem this afternoon and is only really out as a precaution.

Gooners will no doubt hope it doesn’t prove too serious as Lacazette has been in fine form this season, contributing six goals and three assists in eleven games in all competitions.

“This is not what we signed up for” – Could Liverpool, Man Utd & co. be getting cold feet over Super League?
More Stories Alexandre Lacazette