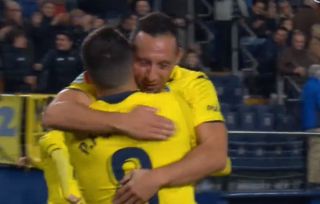 Former Arsenal star Santi Cazorla is in fine form this evening, setting up two goals for Villarreal in the space of just two minutes.

The veteran Spanish playmaker had a nightmare with injuries towards the end of his time at the Emirates Stadium before leaving the club on a free transfer at the end of last season.

Still, it’s good to see Cazorla still has plenty to offer at this level and is enjoying a romantic second spell at Villarreal, the club where he first made his name.

Watch the videos below as Cazorla shows that old magic to provide for his team-mates, including a quality back-heel pass for the second goal by Samuel Chukwueze…