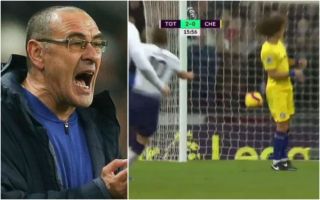 Chelsea manager Maurizio Sarri has offered an explanation for why defender David Luiz moved out of the way of Harry Kane’s shot as the Tottenham striker scored in last night’s Premier League clash at Wembley.

Spurs ran out 3-1 winners over Chelsea, ending their unbeaten start to the season with an emphatic performance, though it’s fair to say the Blues made it easy for them at times.

The home side stunned their visitors with two quick-fire goals in the first half, with the second one from Kane finding its way past Chelsea goalkeeper Kepa with surprising ease.

Replays seemed to show Luiz deciding not to block the ball, which is certainly not the kind of thing you really want to see from your centre-back.

Speaking about the Brazil international’s strange decision after the game, Sarri explained that he felt the player must have been trying to prevent the ball taking a deflection on its way through to goal.

‘I think that David was afraid to touch the ball and change the direction of the ball,’ the Italian tactician was quoted in the Metro.

This could, in theory, have made it even harder for Kepa to save, though it’s also undeniably a bad look for a top defender not to try to do more to prevent the shot getting to his ‘keeper in the first place.