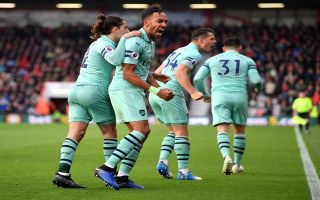 This Arsenal star was so confused before kick-off against Bournemouth that he had to ask Unai Emery what his tactics were just before the game started.

According to a report by The Sun, Arsenal left-back Sead Kolasinac ran over to the dugout to ask Unai Emery if the Gunners were playing a back three or four to start the game.

We can only wonder what Kolasinac was up to during the pre-game team talk but when the Bosnian entered the pitch it seems like his mind was miles away.

Emery’s change to a back three allowed Kolasinac more freedom to go forward and support Arsenal in the final third, the 25-year-old repaid his manager’s faith by delivering one of his best performances in an Arsenal shirt.

Kolasinac assisted both of Arsenal’s goals this afternoon:

Unai Emery may have found the key to getting the best out of Kolasinac in his new left wing-back role.

Kolasinac looked very comfortable alongside Alex Iwobi on Arsenal’s left flank and Emery admitted that the combination between the two was very ‘interesting’:

Emery on playing 3 at the back: “We play like that in pre-season and against Qarabag. We are finding our best performance with the system. The partnership with Kolasinac and Iwobi for example was very interesting.”

Arsenal have improved significantly under Emery this season and the Gunners could make a surprise push towards Champions League qualification this season if they keep this form up.