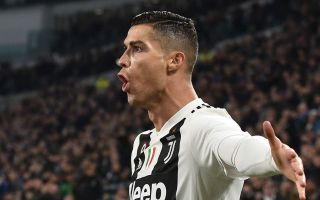 Cristiano Ronaldo claimed a small piece of Juventus history with his goal against SPAL in this weekend’s Serie A clash.

As noted in the tweet below, the Portugal international scored his 10th goal for Juventus since his summer transfer from Real Madrid, becoming the first player in the club’s history to reach that tally so quickly, taking him just 16 games.

Ronaldo broke a whole host of records during his time at Real Madrid, so it’s little surprise to see him already managing to do the same as a Juventus player.

Los Blancos must be absolutely kicking themselves for selling the 33-year-old this summer, with their team really struggling to cope since his departure.

While Juve won again this weekend, Real lost 3-0 to Eibar in a truly shocking La Liga result and performance.

Karim Benzema and Gareth Bale have not stepped up at all in Ronaldo’s absence, with Madrid urgently needing to sign a big-name replacement after this bizarre sale.

Juventus, meanwhile, will hope for much more of this from Ronaldo as his arrival looks to turn them into serious Champions League contenders this season.