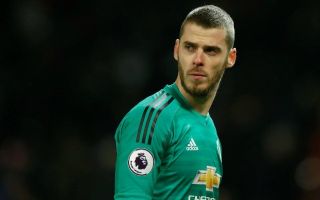 Manchester United are reportedly ready to sell goalkeeper David de Gea for £75million at the end of the season as Juventus line up a transfer.

In a huge blow to United, it looks like the Spain international will be calling time on his Old Trafford stay by not signing a new contract.

De Gea’s current deal expires at the end of the season, though United can trigger a one-year extension to that and plan to do so before selling him at an asking price of £75m in the summer, according to the Sun.

The report adds that Juventus look in pole position to sign the 28-year-old, though another report from the Daily Mail has made the big claim that he looks set to move to Paris Saint-Germain on a free.

This is all rather worrying for United, but if they can trigger that one-year extension in his contract, it will at least mean they can pick up a healthy transfer fee for their star player.

De Gea has truly been an outstanding performer for the Red Devils in recent years, and it’s hard to imagine they’ll easily find someone to replace him.

The Mail link the club with Everton and England shot-stopper Jordan Pickford, but those will be big gloves to fill even for a player of his talents.