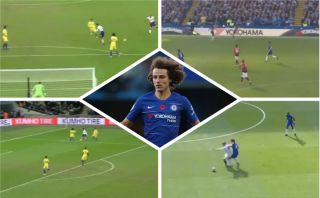 Chelsea surrendered their unbeaten Premier League start to Spurs at Wembley on Saturday evening, a result that seemed to be down to one Blues star in particular.

Brazilian defender David Luiz played a big part in all of the three goals that Tottenham scored on Saturday, and one eagle eyed fan seems to have noticed that this is somewhat of a running trend for the Blues this year.

As posted on Twitter, user @carefree_tug compiled a video of all of the seven goals that Luiz has been responsible for so far this term, and it isn’t good viewing for Chelsea fans.

The video contains all three of Spurs’ goals on Saturday, as well as goals by Cardiff and Newcastle, with every single one of the goals in the compilation seemingly being Luiz’s fault.

Here’s the video in question, one that will surely change a few Chelsea fans’ opinions on the Brazilian….

Didn’t even want to do this. But David Luiz has been directly at fault for SEVEN of the 11 league goals we’ve conceded.

Arsenal injury news vs Newcastle: Two stars in contention for return and Lacazette is close to a return
More Stories David Luiz