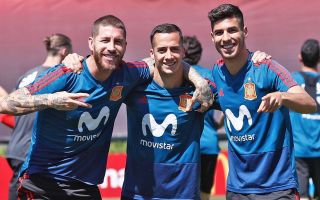 Liverpool and Chelsea may want to take note of some promising transfer news emerging from Spain today involving Marco Asensio and his future at Real Madrid.

It’s not been a great season for the Spain international, and it seems Madrid president Florentino Perez is running out of patience with him, according to Don Balon.

It’s suggested in the report that Perez will look to replace Asensio with a big name like Eden Hazard or Neymar if things don’t improve.

Given that Los Blancos lost Cristiano Ronaldo in the summer without really landing the big-name replacement required, it makes sense that Asensio may now be under pressure.

The 22-year-old has long been considered an exciting talent, but isn’t quite living up to his full potential at the Bernabeu at the moment.

Still, another Don Balon report recently linked Asensio as a target for Liverpool and Chelsea, so it seems big clubs could still be ready to take a gamble on him.

It remains to be seen who will win this transfer battle, but it does seem increasingly likely that the player is edging ever closer to a move away from Real.

If he can improve and make the most of a fresh start elsewhere, Asensio seems like he could be a great fit at Anfield, providing more options for Jurgen Klopp behind his first choice front three.

At Chelsea, Asensio could also be a fine upgrade on Willian and Pedro, or even a replacement for Hazard, who, as noted by Don Balon, is a target for Madrid as he heads towards the final year of his Blues contract.