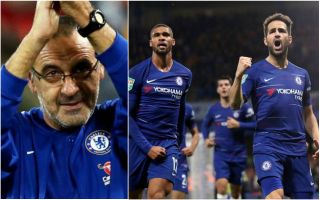 The Italian giants could do with a bit of a revamp in the middle of the season, particularly as they go through something of an injury crisis at the moment.

Fabregas is said to be the prime target for Milan, having been linked with them several times in the past and now coming close to the end of his contract at Stamford Bridge.

That’s according to a report from Sport Mediaset, translated by Football Italia, who also link defensive duo Christensen and Cahill as targets for the Rossoneri.

It remains to be seen if Chelsea would really sell three players of this calibre in one transfer window, with all of them looking useful squad players and backups.

Fabregas may be past the peak of his powers now, but the Spaniard also seems an ideal fit for the style of football deployed by manager Maurizio Sarri.

CFC would also majorly lack depth at the back if they were to let both Christensen and Cahill leave, even if neither have been regulars so far this season.

The performance of David Luiz against Tottenham at the weekend should be reason enough for Sarri to insist on holding on to his squad players, as promising youngster Christensen in particular could be a good option to replace the inconsistent Brazilian at some point.