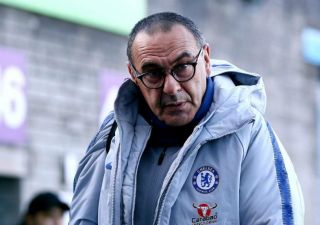 It seems that Jamie Carragher is less than impressed with the role that Chelsea boss Maurizio Sarri has asked N’Golo Kante to play this season.

The Frenchman remains a fundamental figure in the Blues line-up, having made 17 appearances so far this season which means he has sat out just two games across all competitions.

SEE MORE: Chelsea may have to accept loss on loanee as possible €35m exit takes twist

However, with the introduction of Jorginho in the heart of the midfield, it has pushed the World Cup winner in a less familiar role which asks him to offer more in an attacking sense.

It could be argued that Sarri is effectively try to replicate what he built at Napoli with Jorginho pulling the strings, and the energetic and combative presence of Allan alongside him with Mateo Kovacic playing the Marek Hamsik role.

While it worked well at Napoli, albeit with no trophies to show for it, it doesn’t seem as though Carragher is impressed with the Italian tactician’s plan for Kante this season.

“Kante is a very average player in the position he is playing now – I just see a normal midfield player,” he said on Monday Night Football, as noted by The Sun. “When he plays in his natural position I see a world class player.”

David Ginola was the guest pundit, and the Frenchman agreed and added:  “He is going to get the ball back, position everyone, and be the first to pass the ball to the forwards.

“So for me Chelsea are wrong to play Kante in that position, they are wrong.”

Time will tell if Sarri is forced into a re-think and perhaps tinkers slightly to adjust Kante’s role, especially after their first loss of the season against Tottenham this past weekend.

The Jorginho-Kante partnership could be pivotal to their success, and so there is an argument to suggest that changing the latter’s role and positioning slightly could lead to more effective results moving forward.