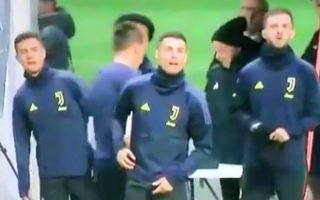 Juventus superstar Cristiano Ronaldo cut a relaxed figure as prepares for their Champions League clash with Valencia on Tuesday night.

The Turin giants sit top of Group H despite their slip up against Man Utd last time out, and know that a draw against their rivals this week would be enough to secure qualification for the knockout stages.

However, they will still be playing for top spot and so the pressure is on to ensure that they pick up all three points and take a major step towards doing so with United facing Young Boys.

Ronaldo has been in fine form so far this season, scoring 10 goals and providing six assists in 16 appearances, and so he’ll undoubtedly lead the line for the Bianconeri.

As seen in the video below though, he’s looking relaxed in training and even had time to pull off a brilliant trick shot which left Paulo Dybala and Miralem Pjanic stunned and grinning as they all watched intensely to see if the spinning effort went into the goal.

It’s unclear if this was Ronaldo’s first attempt at it, but he does make it look so easy, as he does with most things on a football pitch…

Typical day in the life of @Cristiano ? pic.twitter.com/NfG9cywC7u