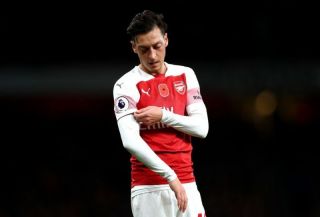 Arsenal boss Unai Emery was quizzed on his decision not to involve Mesut Ozil against Bournemouth on Sunday, and has revealed why he didn’t feature.

The 30-year-old has played a key role for the Gunners so far this season, scoring four goals and providing an assist in 12 appearances in all competitions.

Having started the last four consecutive Premier League games, it had been expected that he would feature heavily against Bournemouth, but it ultimately proved to be the complete opposite as he was an unused substitute.

Unsurprisingly, Emery was asked about his decision not to even introduce the German playmaker as the game played out with Arsenal pushing until late on to secure all three points, and he gave a frank and valid reasoning behind his decision.

“We thought about how we could be better with a very demanding match with physicality and intensity and we decided [to not play him],” he is quoted as saying by Sky Sports.

“Also, today we played with three centre-backs, like some moments in the season we will work like this and it’s another possibility for improvement, to find our best performance in the squad.”

On one hand, the Spaniard has shown that he isn’t afraid to make the big decisions for the good of the team and to ensure that Arsenal ultimately win games.

However, it doesn’t really offer much consolation for Ozil as it arguably raises question marks over his ability to offer physicality and intensity for Arsenal from his own coach, albeit these are flaws that he has been criticised for previously by supporters and pundits alike and so it’s no secret or surprise.

In turn, it remains to be seen if he continues to sit out future games due to the same reason or if Emery has a little more faith in his ability to provide what the team needs. It didn’t cost him on Sunday though as Arsenal picked up all three points at the Vitality Stadium to close the gap on the top four.