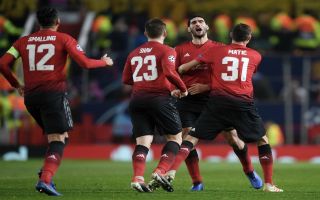 The Red Devils qualified for the knockout phase of the Champions League by beating Young Boys 1-0 at Old Trafford, thanks to an injury-time strike from Marouane Fellaini.

Jose Mourinho’s men are now guaranteed to finish in the top two in Group H alongside Juventus, who also picked up a 1-0 home win on the night against Valencia.

However, United’s performance against the Swiss outfit was by no means impressive, as they once again struggled to break down their opponents while also conceding several guilt-edge chances at the back.

According to ex-Premier League midfielder Murphy, the home side were ‘lucky’ to emerge victorious and he has called into question the team’s overall lack of urgency and fitness.

“You’re better being there and playing badly than playing well and not being there but it’s Manchester United football club and the level of the performance is not what the fans want to see,” he told Sky Sports.

“Young Boys were better in the final third and they could have beaten them. It was another poor performance but they’ve won. They’ve got so many tremendous players and I don’t know why they’re so lacklustre. It was a lucky win.

“The games where they lost at West Ham and Brighton were lacklustre performances. The game against Crystal Palace the other day, Wolves at home and tonight, they all lacked tempo.

“I don’t think the players are going out there and not trying, but could it be fitness? Are they against the way Jose wants to play?

“Subconsciously, if you’re going out not happy with the way you’re setting up, are you going to give it your best? There was just no urgency.”

Next up for Mourinho’s side is a trip to Saint Mary’s to face Southampton on Saturday, which is a must-win game for the team to get their top-four challenge back on track.

United are seventh in the Premier League at the moment, seven points behind fourth-placed Chelsea and 15 behind their table-topping arch-rivals Manchester City, after just 13 matches of the 2018-19 campaign.

A narrow European win against one of the competition’s minnows will have done little to lift the negativity surrounding the club and with huge games against Arsenal and Liverpool to come in December, Mourinho still has a huge task on his hands to galvanise his underperforming squad.