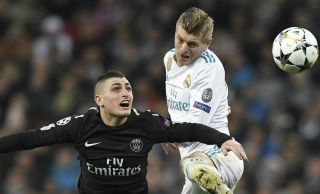 The Germany international is said to be a long-term target for Guardiola, who worked with the player at Bayern Munich and who has been keen to sign him again for City.

That’s according to Spanish source Don Balon, who add that the City manager has already been in talks with Kroos, who also seems keen on a potential switch to the Etihad Stadium, and whose asking price at Madrid has surprisingly fallen to just €60million.

That could be a bargain, especially for a club of City’s wealth and resources, though it remains to be seen if and when a deal can be done.

Real surely won’t want to be letting more experienced players go after the sale of Cristiano Ronaldo in the summer, which has really hit them hard this season.

Kroos is another valuable member of this squad, playing a big part in their recent run of three Champions League final victories in a row.

City would undoubtedly be stronger with him in their ranks but one imagines he could also have plenty of other suitors if he does end up leaving the Bernabeu.