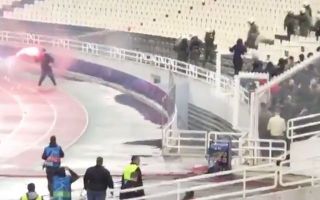 After trouble between the two sets of supporters on Monday night, things continued during AEK Athens vs Ajax in their Champions League clash on Tuesday.

As seen in the video below, a fan was able to get onto the running track around the pitch, and lit a flare before throwing it into the stands where the Ajax fans were congregated.

Further, a loud explosion was heard and can be seen below, while police were also called into action as they penned in the Ajax supporters.

It’s certainly not what UEFA want to see and so both clubs are arguably now at risk of facing further action being taken, as events off the pitch overshadowed those on it with Ajax hoping to secure a win which would book their place in the knockout stage of the Champions League.

It’s unclear at this stage as to whether or not there have been any injuries, but the welfare of their supporters is seemingly a concern at this stage.