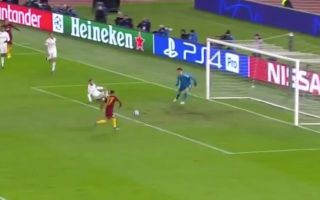 Roma winger Cengiz Under was presented with a wonderful chance to break the deadlock against Real Madrid, but he completely fluffed his lines.

The Giallorossi hosted the reigning European champions at the Stadio Olimpico on Tuesday night, although both sides were already assured of a place in the knockout stage of the Champions League.

In turn, the battle was on to claim top spot in Group G, and Under was given a brilliant chance to open the scoring after his teammates had pounced on a sloppy bit of play from Dani Carvajal.

As seen in the video below though, the Turkish international was unable to make the most of it as he blazed over from close range and was left shocked that he hadn’t converted.

That will undoubtedly be a massive blow for his confidence, and so Roma coach Eusebio Di Francesco will surely look to have a word with him during the half-time interval.

It was completely out of character as the classy 21-year-old has bagged three goals and five assists in 15 appearances so far this season. However, his goal tally should certainly read four goals now but instead he’s left to rue this awful miss…