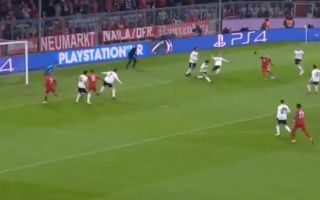 Despite being 34 years of age now, Arjen Robben showed he still has it with this brilliant goal for Bayern Munich in their Champions League clash with Benfica.

Ajax had already booked their place in the knockout stage earlier on Tuesday with their win over AEK Athens, and Bayern were hoping to follow suit.

Robben sent them on their way with this fine solo effort, as he went on a brilliant mazy run to beat four defenders to get himself into position inside the box, before unleashing a stunning finish to bend his effort past the goalkeeper.

The Dutchman has produced this move on countless occasions over the years, but he still clearly takes some stopping as he made it four goals in 15 appearances so far this season.

Albeit in the latter stages of his career, it’s still a delight to see him produce this kind of quality…