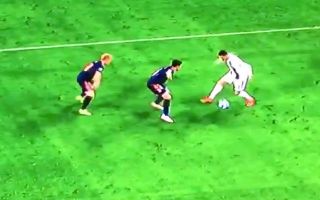 Juventus toiled for much of the first half against Valencia on Tuesday night, but Mario Mandzukic eventually found a breakthrough for the Turin giants.

A win would be enough to send the Italian champions through to the knockout stage of the Champions League, while if Man Utd fail to beat Young Boys, it would also seal top spot in Group H.

In turn, Mandzukic’s tap-in could prove to be a decisive goal as the Croatian forward was on hand to finish off some great work from Cristiano Ronaldo.

As seen in the video below, the Portuguese superstar picked the ball up on the left side of the penalty area, before a quick step-over created enough space to drill the ball across the face of the goal.

Despite two defenders closing him down, Ronaldo still managed to find the perfect pass to put it on a plate for Mandzukic, as he continued his fine run of assists so far this season.

That’s now 10 goals and seven assists for the 33-year-old in 17 games in all competitions, as he has become a creative force for the Bianconeri as well as scoring plenty of goals to lead their bid for trophies this season.

Ronaldo shows off his skills to set up Mario Mandžuki?.

His seventh assist this season ? pic.twitter.com/amgPpGNbpV