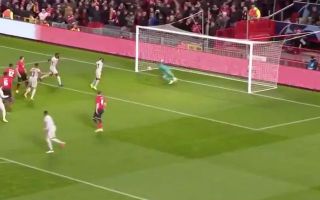 As Man Utd toiled in their bid to find a breakthrough against Young Boys, they had David de Gea to thank for producing a brilliant save to keep it goalless.

After their frustration against Crystal Palace at the weekend, the last thing that Jose Mourinho would have wanted to see was another scrappy and tight affair with no goals.

Unfortunately for him, that’s exactly what he got as neither side could find a breakthrough, and fortunately for United they had De Gea between the posts to produce an unbelievable goal-line save to deny the visitors a famous lead at Old Trafford.

As seen in the video below, the strike from outside the box took a deflection which appeared to be sending it towards the back of the net with some of the Young Boys players even starting to run off ready to celebrate their opener.

However, De Gea somehow leaps to his right side and stops the ball on the line, with replays and goal-line technology showing that the ball hadn’t gone over.

In turn, the Spanish shot-stopper has produced another memorable moment to keep his side in the game, and it will serve as further proof as to why he is widely regarded as the best goalkeeper in Europe.

OH MY GOD. THIS IS UNBELIEVABLE FROM DE GEA. pic.twitter.com/R8tS2AZu09