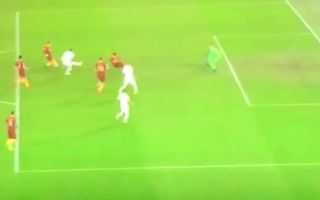 After being handed a lifeline in the first half, Real Madrid wasted no time in taking the lead against Roma after the interval with Gareth Bale giving them the lead.

The visitors should have fallen behind in their Champions League clash at the Stadio Olimpico, but Cengiz Under produced a horror miss which ensured that the two sides went in level at the break.

Real Madrid wasted little time in breaking the deadlock in the second half though, as Bale pounced following a poor clearance from Roma goalkeeper Robin Olsen, as seen in the video below.

The Welsh international kept his cool and slotted the ball home to give his side the lead. Both teams have already qualified for the knockout stage, but top spot in the group is still up for grabs which in turn made this a crucial encounter.

With that in mind, Bale may well have scored what proves to be a vital goal for Real Madrid…