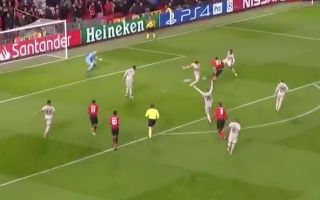 Man Utd left it very late but they secured a win over Young Boys at Old Trafford with Marouane Fellaini scoring in injury time.

After being held to a goalless draw by Crystal Palace at the weekend, it looked like Jose Mourinho and his men were set for a repeat on Tuesday night in their Champions League clash.

However, Fellaini had other ideas as he stepped up in injury time to lash home the winning goal to spark incredible scenes at Old Trafford, with Mourinho clearly letting out his frustration too, as seen in the video below.

With that goal, United secure their place in the knockout stage of the competition, with Juventus defeating Valencia in the other game in Group H to leave the Spaniards five points adrift of the Red Devils with just one game remaining.

In turn, it’s a crucial goal for the Premier League giants, and Mourinho will hope that it lifts some of the pressure off their shoulders that has been building due to their lack of goals.

Marouane Fellaini to the rescue again!!!!