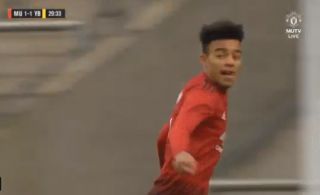 Playing for the Red Devils in the Under-19s edition of the Champions League against Young Boys, the teenage attacker went on a mazy run from out wide before drilling home.

In truth, the senior United team could do with more like that from players like Alexis Sanchez and Marcus Rashford at the moment, and these fans below have certainly hinted he should be getting a promotion.

That seems unlikely at this stage, especially with Jose Mourinho’s record with young players, but Greenwood really looks an exciting prospect on the future after catching the eye for some time now at youth level.

Mason Greenwood should be transported straight from Leigh Sports Village to Old Trafford for tonight’s game. Doesn’t even need to take his boots off #MUFC

Wish Mourinho would grow a pair and bring Mason Greenwood into the first team, the lad is on another level.

Mason Greenwood just did this. Get this kid in the first team, he deserves a chance. Unreal talent. ?? pic.twitter.com/dLfKYjOAMS

2 more goals for Mason Greenwood in the first half, what does he have to do to earn a first team call-up, oh wait our manager does fuck all for youth stars unless he's called Scott Mcmayonaise #MUFC #MUAcademy

Get mason greenwood to the first team!!!! #MUFC

Mason Greenwood upfront on the weekend, anyone? #MUFC