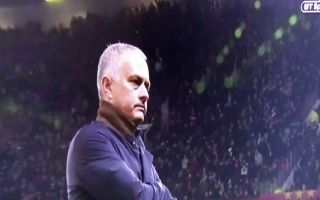 The Red Devils are hosting Young Boys at Old Trafford in Group H, knowing that a win could see them safely through to the knockout phases of the competition.

Mourinho’s men have been on top in the first half but really should be heading into the break with a 1-0 lead, after Rashford spurned a glorious chance to open the scoring.

The English striker found himself one on one with the Young Boys keeper after a Luke Shaw clearance found him deep in opposition territory, but instead of taking it round him and slotting into an empty net he opted for an audacious chip, which sailed over the bar.

Mourinho reacted in disbelief, folding his arms and shaking his head as his frustrations on the sideline continue to mount.

Check out the Portuguese manager’s reaction below, via Twitter.