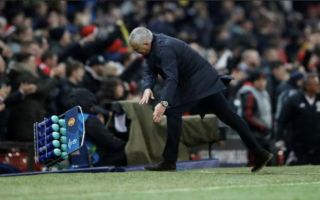 The Red Devils had endured another frustrating game at Old Trafford on Tuesday night in the Champions League, knowing that a win would seal their spot in the last 16 of the competition.

Marcus Rashford missed a couple of great chances throughout the 90 minutes but Young Boys also had their moments, with David De Gea coming to the rescue to prevent the visitors from taking the lead late on.

However, in the end, United got the result they needed as Fellaini took the ball down brilliantly on the edge of the opposition box before turning quickly and firing the ball into the net in added time.

Mourinho reacted by smashing the drinks crate next to him, in a mad moment which is sure to raise a few eyebrows.

Marouane Fellaini to the rescue again!!!!