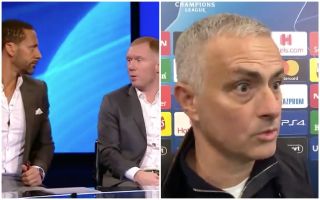 The Red Devils left it late to secure a win over Young Boys at Old Trafford in their Champions League clash on Tuesday night.

SEE MORE: Gary Lineker slammed Jose Mourinho for what he did during Man Utd win over Young Boys

However, Marouane Fellaini’s goal in injury time ultimately sealed their place in the knockout stage, and so there was reason to be slightly cheerful for United.

Mourinho began his post-match interview discussing the performance, result and what he wasn’t happy with, and there was little to take issue with.

That didn’t last though, as seen in the video below, as he decided it was the right time to once again rattle through his achievements as a manager, this time reminding everyone of his run in the Champions League and in Europe in general.

It’s that part of his interview that didn’t sit well with Ferdinand and Scholes, who blasted the Man Utd boss for making it about himself and looking back at the past again.

While they insisted that they were pleased with the victory and the fact that United are through, they were arguably left more frustrated if anything that Mourinho had managed to make it about himself again along with his touchline celebrations after Fellaini’s winner.

“14 seasons in the Champions League. 14 times qualified through the group phase.”

“The season I didn’t play Champions League I won the Europa League.”

Jose Mourinho with a message for his ‘lovers’ ? pic.twitter.com/wDNiTyY96X

“It’s always ‘I’ last time I looked football was a team game.”

They do not hold back! pic.twitter.com/qpsZFDAarQ